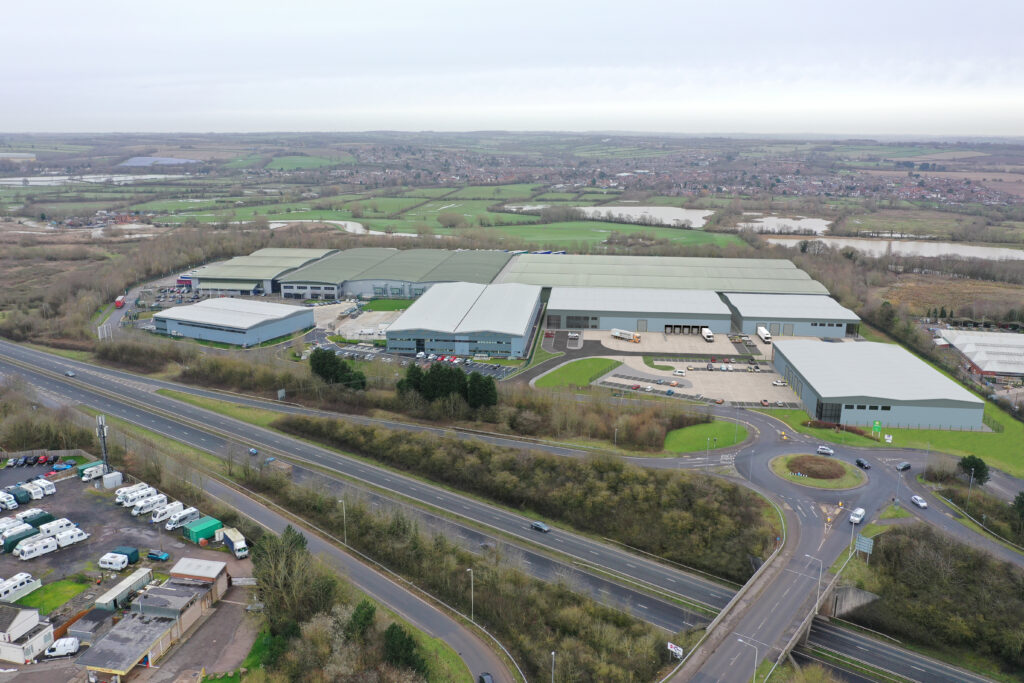 The final plot at Rotherhill Developments successful Crosslink 646 scheme, just south of Loughborough off the A6 and north of Leicester off the A46 and J21A of the M1, is now available with bespoke built units offered to purchase or rent from as little as 20,000ft² upwards.

Already on the scheme two units have been built and sold totalling 100,000ft² and the final plot is now being pushed forward by agents Tim Gilbertson of FHP and Mike Allwood of Andrew & Ashwell.

With great communication links and an almost unique position in the market place around Leicester, being able to offer freehold a well as leasehold deals, the agents are keen to find purchasers or tenants for the final industrial and warehousing buildings to be developed.

“We are delighted with the two deals completed at Crosslink so far but our agents are now stepping up their marketing efforts to find buyers or tenants for the final units on the scheme.  We have refreshed our marketing to include a new website, videos and CGI’s, all of which really bring the scheme to life.

I think we are uniquely positioned in that we can offer bespoke built B1 or B8 space to buy or rent whereas up and down the M1 Corridor in the East Midlands most developers are only interested in letting rather than selling.  At Rotherhill we are relaxed on this as being a niche developer we can be flexible to the requirement of the local market and Leicester companies who we feel like to have the option to buy as well as rent space.

“Paul is quite right in what he is saying, the majority of interest we have tends to be from companies looking to buy rather than rent space, exemplified by the first two deals on the site which were both freehold sales.

The latest marketing looks great, hopefully potentially interested parties will have a look at the CGI’s and videos which are on the Crosslink website.  This can be accessed at www.crosslink646.co.uk.”

“What we have found with marketing this scheme is interest not only from Loughborough and Leicester based companies but also from further afield, our ability to sell as well as let really is a key driver of potentially interested parties to the site and with so little land available in and around the East Midlands we are hopeful and indeed confident, of announcing further deals soon.

We are already in detailed negotiations with a couple of parties for the final plot but there is still enough time for occupiers to come forward and express their interest.

We use cookies on our website to give you the most relevant experience by remembering your preferences and repeat visits. By clicking “Accept”, you consent to the use of ALL the cookies.
Do not sell my personal information.
Cookie SettingsAccept
Manage consent

This website uses cookies to improve your experience while you navigate through the website. Out of these, the cookies that are categorized as necessary are stored on your browser as they are essential for the working of basic functionalities of the website. We also use third-party cookies that help us analyze and understand how you use this website. These cookies will be stored in your browser only with your consent. You also have the option to opt-out of these cookies. But opting out of some of these cookies may affect your browsing experience.
Necessary Always Enabled
Necessary cookies are absolutely essential for the website to function properly. These cookies ensure basic functionalities and security features of the website, anonymously.
Functional
Functional cookies help to perform certain functionalities like sharing the content of the website on social media platforms, collect feedbacks, and other third-party features.
Performance
Performance cookies are used to understand and analyze the key performance indexes of the website which helps in delivering a better user experience for the visitors.
Analytics
Analytical cookies are used to understand how visitors interact with the website. These cookies help provide information on metrics the number of visitors, bounce rate, traffic source, etc.
Advertisement
Advertisement cookies are used to provide visitors with relevant ads and marketing campaigns. These cookies track visitors across websites and collect information to provide customized ads.
Others
Other uncategorized cookies are those that are being analyzed and have not been classified into a category as yet.
SAVE & ACCEPT